Getting started on my home k8s setup

During the last month, there’s been a lot of changes to my life. I started a new job at Lunar Way, and not least I became a dad for the 3rd time, this time to a little boy.

By starting at Lunar Way I became a colleague with Kasper Nissen which, during one of the geek chats, told me about his (and another colleague, Martin Jensen’s) project kubecloud.io. In the essence, they build a small cloud of Raspberry Pi’s and installed kubernetes on them. The idea resonated with me and it made me want to replicate it. Not only because I love playing with kubernetes and want my own k8s cloud at home to geek with, but rather that I’ve got a running home automation system which could use some high availability improvements.

So let’s start with where I am today:

A Synology server running Synology DiskStation with Docker installed as a plugin. On top of that I run 2 docker containers:

The setup is running alright, but now and then my Synology server seems to run low on system resources. This requires either a full server reboot or rebooting docker images and waiting for them to come up again. Not only is this a manual task, but it also leaves some downtime where no buttons in my house are working.

A way to stabilize my home automation is to make it faster to recover. That means that I need a server to take over when one becomes unavailable. This is where the kubernetes cluster comes in. Even though I been using kubernetes for quite some time I first started considering a full blown cluster when I became knowledgeable about Kasper’s work on using Raspberry Pi’s + kubernetes. The idea of using k8s and Pi’s fits well to my project because:

To get started I ordered 4 new Raspberry Pi Model 3 B+’s and 4 64GB MicroSD cards. I also went through my old equipment and found a switch, ethernet & microusb cables + some usb power supplies and a power strip. 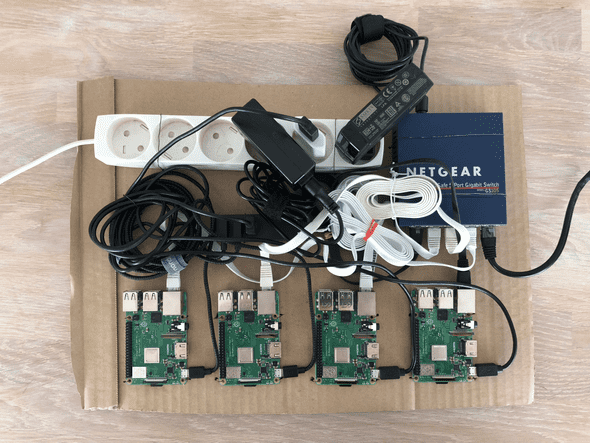 Since I, at the moment, use a lot of “recycled” equipment my setup look a bit messy and DIY, but I guess that will evolve over time. For now it does what it needs to do.

So now I have the Raspberry Pi’s running. I’ve named the cluster h2e.

The idea is that the new setup should look like this:

With a cluster with the above mentioned specs I should be able to run my home automations pretty reliable. It would be better to run multiple instances of home-assistant & node-red, so there would be no downtime, but from what I’ve been reading until now, this isn’t possible in any near future.

I will split this project into several blog posts on the different subjects:

Written by Emil Ingerslev who lives and works in Aarhus, Denmark. You should follow him on Twitter